The Discovery of Texas

Texas has been inhabited for thousands of years, but very little about its history prior to its discovery by Europeans has been preserved. In 1492, Christopher Columbus made his fabled voyage from Spain across the Atlantic Ocean and discovered San Salvador Island in the Bahamas. In the decades to follow, Columbus and numerous others found and mapped new lands as far as their ships could carry them throughout the Atlantic coasts of North, Central, and South America. The part of the Gulf of Mexico that forms the southern coast of the United States, including Texas, was one of the last coastal areas to be explored. It was not mapped until 1519.

Spain's early attempts to place settlements in the present-day U.S. focused exclusively on Florida and the south Atlantic coast. These attempts were sporadic and unsuccessful. One of them was an expedition launched by Pánfilio de Narváez in 1527. Even though this expedition was a notable disaster, it did result in the first presence on Texas soil by Europeans - or any other non-indigenous people, for that matter - and gave Spain its first intelligence about the land to the north of Mexico. Four of Narváez's men, including Alvar Nuñez Cabeza de Vaca, spent seven years living with the natives in Texas and wandering through the land. Cabeza de Vaca's detailed, vivid, and fascinating account of his travels is the oldest known written history of Texas.

The articles below descibe how Texas was discovered, beginning with Columbus's first voyage to the Gulf of Mexico to Cabeza de Vaca's epic journey.

Articles on the First Spanish Explorers of North America

Figure 1. Counties visited by the Narváez Expedition between 1528 and 1536. Counties in dark red were certainly or probably visited. Counties in light red may have been visited.

Analysis and Interpretation of the Narváez Expedition

The Narváez Expedition in Texas, County-By-County 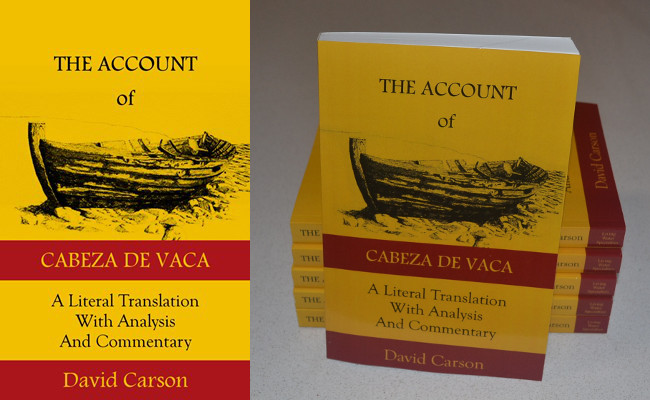 Order your copy of The Account of Cabeza de Vaca: A Literal Translation with Analysis and Commentary, translated by David Carson of TexasCounties.net, available in E-book and paperback formats.